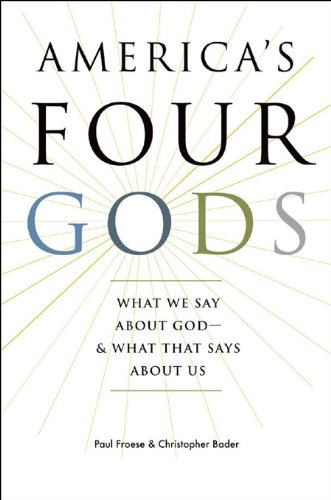 Despite all the hype surrounding the "New Atheism," the United States remains one of the most religious nations on Earth. In fact, 95% of Americans believe in God--a level of agreement rarely seen in American life. The greatest divisions in America are not between atheists and believers, or even between people of different faiths. What divides us, this groundbreaking book shows, is how we conceive of God and the role He plays in our daily lives.

America's Four Gods draws on the most wide-ranging, comprehensive, and illuminating survey of American's religious beliefs ever conducted to offer a systematic exploration of how Americans view God. Paul Froese and Christopher Bader argue that many of America's most intractable social and political divisions emerge from religious convictions that are deeply held but rarely openly discussed. Drawing upon original survey data from thousands of Americans and a wealth of in-depth interviews from all parts of the country, Froese and Bader trace America's cultural and political diversity to its ultimate source--differing opinions about God. They show that regardless of our religious tradition (or lack thereof), Americans worship four distinct types of God: The Authoritative God--who is both engaged in the world and judgmental; The Benevolent God--who loves and helps us in spite of our failings; The Critical God--who catalogs our sins but does not punish them (at least not in this life); and The Distant God--who stands apart from the world He created. The authors show that these four conceptions of God form the basis of our worldviews and are among the most powerful predictors of how we feel about the most contentious issues in American life.

Accessible, insightful, and filled with the voices of ordinary Americans discussing their most personal religious beliefs, America's Four Gods provides an invaluable portrait of how we view God and therefore how we view virtually everything else.

Americas Four Gods What We Say About God And What, is it available on Amazon?

Yes! But at Pricepulse we inform you when is the lowest price to buy the Americas Four Gods What We Say About God And What

Should I buy the Americas Four Gods What We Say About God And What now?

What is the current price of Americas Four Gods What We Say About God And What?

What was the lowest price for the Americas Four Gods What We Say About God And What?