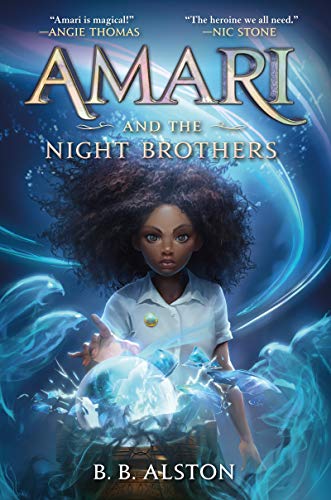 Product Description Artemis Fowl meets Men in Black in this exhilarating debut middle grade fantasy, the first in a trilogy filled with #blackgirlmagic. Perfect for fans of Tristan Strong Punches a Hole in the Sky, the Percy Jackson series, and Nevermoor. Amari Peters has never stopped believing her missing brother, Quinton, is alive. Not even when the police told her otherwise, or when she got in trouble for standing up to bullies who said he was gone for good. So when she finds a ticking briefcase in his closet, containing a nomination for a summer tryout at the Bureau of Supernatural Affairs, she’s certain the secretive organization holds the key to locating Quinton—if only she can wrap her head around the idea of magicians, fairies, aliens, and other supernatural creatures all being real. Now she must compete for a spot against kids who’ve known about magic their whole lives. No matter how hard she tries, Amari can’t seem to escape their intense doubt and scrutiny—especially once her supernaturally enhanced talent is deemed “illegal.” With an evil magician threatening the supernatural world, and her own classmates thinking she’s an enemy, Amari has never felt more alone. But if she doesn’t stick it out and pass the tryouts, she may never find out what happened to Quinton. From School Library Journal Gr 3–7—Amari Peters is a young Black girl who believes her brother Quinton is alive, even if no one else does. Everything is going wrong and she just got expelled from school, but something exciting is about to happen. Amari, as recommended by her brother, joins a summer camp at the Bureau of Supernatural Affairs. She starts to learn a special skill all her own, and discovers magical creatures exist (fairies, aliens, and magicians, to name a few) that the Bureau must protect from average people. Readers follow Amari as she navigates a new magical world, hones her skills, and searches for her brother who was attempting to track down the Night Brothers—a mysterious band of magical criminals. This series debut is sure to be a hit with late elementary students and middle graders who are fans of "Harry Potter," "Percy Jackson," and the Men in Black movies. There are a lot of diverse characters who will be relatable to all kids. Amari is tough, smart, kind, and very likeable. The plot doesn't shy away from depictions of racism and discrimination, which may provide necessary, thoughtful discussion topics for classrooms and families. VERDICT This story is action-packed with no fluff; a magical world readers will want to visit, blended with contemporary themes. An excellent middle grade fantasy that will attract an immediate fan base and leave kids eager for more.—Maeve Dodds, Charlotte Mecklenburg Lib., NC Review “An enchanting fantasy adventure filled with heart and soul. Amari is magical!” -- Angie Thomas, #1 New York Times bestselling author of THE HATE U GIVE "The surprises and story never slow down for a minute in this magical, astonishing world, with a heroine who’s like Buffy meets Meg Murry multiplied by Shuri to the power of awesome. I want to live in Amari’s world and watch her save it (or have her come here and save ours!)!" -- Tui Sutherland, bestselling author of the Wings of Fire series “The story introduces a world of enchantment, danger, excitement, and humor. While many parallels can be drawn between the protagonist and a certain boy wizard, readers will root for Amari’s own unique determination and wit.” -- Horn Book Magazine “The author weaves magical whimsy with honest, realistically portrayed circumstances, allowing Amari’s literal #BlackGirlMagic to shine even when she doesn’t believe in herself. This timely, energetic, first-person narrative moves quickly with clear descriptions, a thrilling buildup, and strong messages about profiling. An impressive debut series opener.” -- Kirkus Reviews  (starred review) “ Amari and the Night Brothers gives an electrifying jolt to middle-grade fantasy, that ta

Current price$14.34
Since 38 days
Average price$16.69
Based on 8 months
Lowest price ever$14.34
38 days ago
Highest price ever$17.99
8 months ago
Amazing
Great
Average
High
This is absolutely the best time to buy. Don’t miss out, there's 63% probability of this price being higher soon. Buy now.
Buy on Amazon

Love from The Very Hungry Caterpillar (The World of Eric Carle)

The Complete Cookbook for Young Chefs: 100+ Recipes that You'll Love to Cook and Eat

There Was an Old Lady Who Swallowed a Rose!

Love Does for Kids

Amari And The Night Brothers Supernatural Investig, is it available on Amazon?

Yes! But at Pricepulse we inform you when is the lowest price to buy the Amari And The Night Brothers Supernatural Investig

Should I buy the Amari And The Night Brothers Supernatural Investig now?

This is absolutely the best time to buy. Don’t miss out, there's 63% probability of this price being higher soon. Buy now.

What is the current price of Amari And The Night Brothers Supernatural Investig?

What was the lowest price for the Amari And The Night Brothers Supernatural Investig?