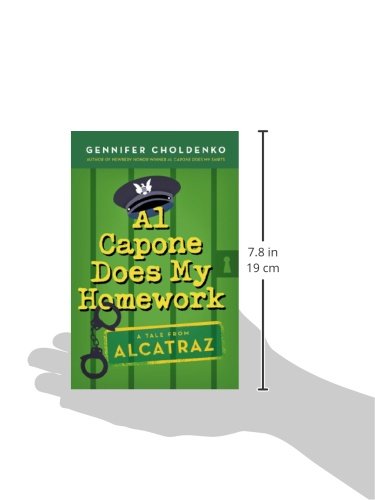 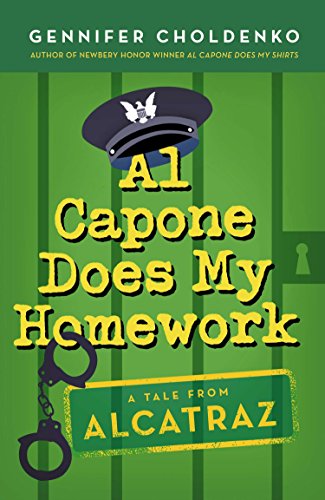 Product Description Alcatraz Island in the 1930s isn't the most normal place to grow up, but it's home for Moose Flanagan, his autistic sister, Natalie, and all the families of the guards. When Moose's dad gets promoted to Associate Warden, despite being an unlikely candidate, it's a big deal. But the cons have a point system for targeting prison employees, and his dad is now in serious danger. After a fire starts in the Flanagan's apartment, Natalie is blamed, and Moose bands with the other kids to track down the possible arsonist. Then Moose gets a cryptic note from the notorious Al Capone himself. Is Capone trying to protect Moose's dad too? If Moose can't figure out what Capone's note means, it may be too late. The last heart-pounding installment in the New York Times bestselling, Newbery Honor-winning Alcatraz trilogy is not to be missed! "Superlative historical fiction." -- School Library Journal (starred review for Al Capone Shines My Shoes) Review +Delivers a satisfying conclusion to readers who've grown fond of this cast of characters." — School Library Journal "Rich characterization, tender drama, and sleuthworthy clues, this poignant mystery makes for a thoroughly satisfying conclusion to the landmark historical trilogy." — Booklist, starred review "Choldenko consistently excels at penning pitch-perfect dialogue and balancing a large cast of original characters, and this title is no exception....A satisfying finale to what has become a cornerstone series in contemporary children's literature." — Kirkus Reviews "Choldenko's multifaceted novel offers something for everyone-history, mystery, intrigue, and humor. Ultimately, though, it's this extremely likable boy working through friendships and crushes, on the one hand, and wrestling with family and community problems, on the other, that has held our attention through three books." — The Horn Book "Choldenko continues to infuse the Alcatraz community with warmth and originality. . .Despite being 'the roughest hard-time prison in America,' by the end of this winning series, it's also a place Moose comes to proudly call home." — Publishers Weekly, starred review "Choldenko's storytelling is compelling, portraying human decency as a force more powerful than heroism." — Newsday About the Author Gennifer Choldenko is the New York Times bestselling and Newbery Honor Award-winning author of ten children's books, including Notes From a Liar and Her Dog, If a Tree Falls at Lunch Period, No Passengers Beyond this Point, Al Capone Does My Shirts, Al Capone Shines My Shoes, and Al Capone Does My Homework. She lives in the San Francisco Bay Area with her family. Excerpt. © Reprinted by permission. All rights reserved. 1. The Warden’s Son Sunday, January 19, 1936 Today is my dad’s first official day as associate warden on Alcatraz Island, home to anyone who is anyone in the criminal world. On our island we have world-famous robbers, thieves, swindlers, sharpshooters, second-story burglars, mad-dog murderers, plus a whole lot of ordinary criminals—vicious but not well-known. No one ever believes I live on Alcatraz. Even my eighth-grade history teacher made me write on the chalkboard I do not live on Alcatraz two hundred times. She didn’t even apologize when she found out I wasn’t lying. My mother couldn’t buy stockings at O’Connor and Moffat’s. They wouldn’t take her check, on account of it said: Helen Flanagan, Alcatraz Island, California. My father had trouble getting his driver’s license. They thought he was an escaped prisoner too stupid to fake his address, instead of an officer at the most notorious prison in North America. My friend Annie was kicked out of Sunday school for saying she lived on Alcatraz. They sent her to confession. She confessed she didn’t live on Alcatraz and the next day she confessed she’d lied in confession. Of course, Piper, the warden’s daughter, never gets in trouble for anything. Nothing sticks to her. She’s as slippery as a bar of

The Goodnight Train Rolls On! Board Book

Al Capone Does My Homework Tales From Alcatraz, is it available on Amazon?

Yes! But at Pricepulse we inform you when is the lowest price to buy the Al Capone Does My Homework Tales From Alcatraz

Should I buy the Al Capone Does My Homework Tales From Alcatraz now?

What is the current price of Al Capone Does My Homework Tales From Alcatraz?

What was the lowest price for the Al Capone Does My Homework Tales From Alcatraz?