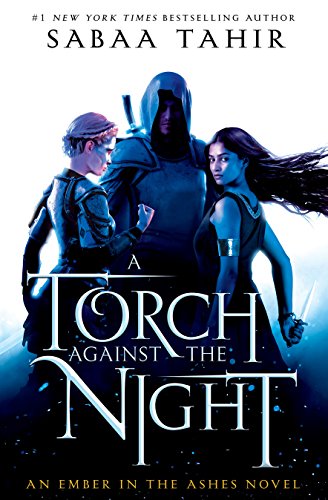 Product Description THE #1 NEW YORK TIMES BESTSELLERBook two in the New York Times bestselling seriesA USA Today  bestsellerA Wall Street Journal bestseller “ Spectacular.” — Entertainment Weekly“ Fresh and exciting...Tahir has shown a remarkable talent for penning complex villains.” —A.V. Club "Even higher stakes than its predecessor… thrilling."  — Publishers Weekly, starred review “[An] action-packed, breathlessly paced story.” — Booklist, starred review Set in a rich, high-fantasy world inspired by ancient Rome, Sabaa Tahir's AN EMBER IN THE ASHES told the story of Laia, a slave fighting for her family, and Elias, a young soldier fighting for his freedom.   Now, in A TORCH AGAINST THE NIGHT, Elias and Laia are running for their lives.After the events of the Fourth Trial, Martial soldiers hunt the two fugitives as they flee the city of Serra and undertake a perilous journey through the heart of the Empire.   Laia is determined to break into Kauf—the Empire’s most secure and dangerous prison—to save her brother, who is the key to the Scholars' survival. And Elias is determined to help Laia succeed, even if it means giving up his last chance at freedom.   But dark forces, human and otherworldly, work against Laia and Elias. The pair must fight every step of the way to outsmart their enemies: the bloodthirsty Emperor Marcus, the merciless Commandant, the sadistic Warden of Kauf, and, most heartbreaking of all, Helene—Elias’s former friend and the Empire’s newest Blood Shrike. Bound to Marcus's will, Helene faces a torturous mission of her own—one that might destroy her: find the traitor Elias Veturius and the Scholar slave who helped him escape...and kill them both. Review Named one of the best books of the year by: TIME Entertainment Weekly  Buzzfeed Amazon PopSugar Bustle Paste Magazine PopCrush Praise for A Torch Against the Night: “The stakes here are high and the plot runs like a well-oiled machine, ratcheting up the tension with every chapter.” — NPR.org“An adrenaline rush till the very last page.” — Buzzfeed   “The sequel to Tahir’s bestselling smash An Ember in the Ashes finally comes out in August, and let me tell you, it does not disappoint.” — Book Riot   “ A Torch Against the Night is an unabashed page-turner that scarcely ever pauses for breath.”  —The Christian Science Monitor   “Fast-paced, exciting and full of adrenaline, A Torch Against The Night is everything fans of Tahir’s debut could possibly anticipate in a sequel.”  — The Bucks County Courier Times“Thrilling…Tahir meticulously plots these novels, ramping up the suspense and including plenty of surprises.” — The Buffalo News“Delivers in every way...The stakes have never been higher, and the tension is acutely felt as Elias and Laia run for their lives.” —USA Today’s Happy Ever After blog   “At last, it’s here...It’s as heartbreaking as it is action-packed, delivering a worthy second installment in Tahir’s bestselling series.” —Paste “Tahir proves to be a master of suspense and a canny practitioner of the cliffhanger, riveting readers’ attention throughout.…[An] action-packed, breathlessly paced story.” — Booklist, starred review "This sequel has a darker tone and even higher stakes than its predecessor, setting the stage for a thrilling conclusion." — Publishers Weekly, starred review"Excellent." —Kirkus Reviews "The rare sequel that improves on the original... unputdownable." — Common Sense Media (Five Stars)Praise for An Ember in the Ashes:“This novel is a harrowing, haunting reminder of what it means to be human — and how hope might be kindled in the midst of oppression and fear.” — The Washington Post “An Ember in the Ashes could launch Sabaa Tahir into JK Rowling territory…It has the addictive quality of The Hunger Games combined with the fantasy of Harry Potter and the brutality of Game of Thrones.”— Public Radio International "An Ember in the Ashes glows, burns, and smolders—as beautiful and radiant as it is searing."

Current price$10.99
Since 44 hours
Average price$9.56
Based on 3 years
Lowest price ever$6.94
17 months ago
Highest price ever$11.99
21 months ago
Amazing
Great
Average
High
It's not a good time to buy now, there's a 63% probability this price will decrease. Our advise is to Watch it.
Buy on Amazon

A Torch Against The Night An Ember In The Ashes, is it available on Amazon?

Yes! But at Pricepulse we inform you when is the lowest price to buy the A Torch Against The Night An Ember In The Ashes

Should I buy the A Torch Against The Night An Ember In The Ashes now?

What is the current price of A Torch Against The Night An Ember In The Ashes?

What was the lowest price for the A Torch Against The Night An Ember In The Ashes?

The lowest historical price was $6.94