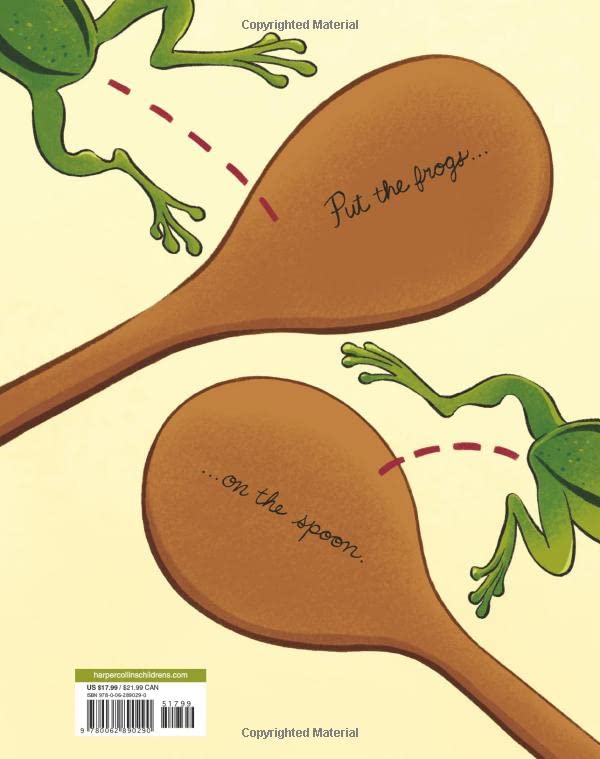 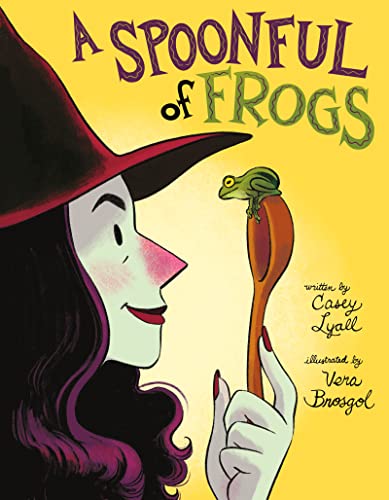 Product Description Frogs are the most important ingredient in a witch’s favorite treat—but they are also the hardest to get into the cauldron! From acclaimed author Casey Lyall and Caldecott Honor artist Vera Brosgol, A Spoonful of Frogs is a humorous and wholly original picture book—and a winning recipe for readers who loved Dragons Love Tacos and Room on the Broom. A witch’s favorite treat is frog soup. Luckily, it’s healthy and easy to make. To give it that extra kick and a pop of color, the key ingredient is a spoonful of frogs. But how do you keep the frogs on the spoon? They hop, they leap, they hide . . . and they escape. What is a poor witch to do? Casey Lyall is a master of comedic timing with her deceptively simple and energetic text, and Caldecott Honor winnerVera Brosgol’s vibrant, hilarious illustrations make the witch—and the frogs!—practically leap off the page. The solution to the witch’s dilemma will surprise and delight young readers and their parents alike. Teeming with laugher and hijinks, A Spoonful of Frogs is pure fun from beginning to end. A must-have for young readers, parents, witches, frog-lovers, and aspiring chefs. From School Library Journal PreS-Gr 1-A very pale, red-nosed witch, clad in burgundy rather than the traditional black, hosts her TV show entitled "Bewitching Kitchen." Today's episode involves a demonstration on how to make Frog Soup. Step by step she takes "viewers" through the recipe from placing the cauldron on the fire to attempting to put a frog on a spoon in order to add it to the pot for "a kick of flavor and a pop of color." At this point in the story, which is told in absolute deadpan but with an underlying and expanding sense of mischief, children will begin laughing at the antics of the poor witch as she attempts to complete the recipe for her audience. Expecting the frog to stay on the spoon is her undoing as she tries to remain professional and keep her cool. Brosgol's engaging digital illustrations show a fitted-out kitchen with a large stove, hanging pots, drying herbs and jars of unspecified and indeterminate contents. The army of frogs the pink-aproned witch keeps in an aquarium are full of energy and bounce and, though they are trying the woman's patience, their faces remain serenely calm and innocent. VERDICT This entertaining tale is a humorous look at how well-laid plans can sometimes go awry, and it will tickle children's silly bones.-Maryann H. Owenα(c) Copyright 2011. Library Journals LLC, a wholly owned subsidiary of Media Source, Inc. No redistribution permitted. Review “An attempt to make frog soup, a witch’s favorite treat, spells disaster during a cooking show when a key ingredient refuses to cooperate with the enchanting chef. . . . Lyall paces this mischievous story deliciously with well-timed page turns and repetition . . . Brosgol, meanwhile, makes excellent use of both white space and multipanel pages to enhance the comedic experience. . . . An all-seasons recipe for storytime success as readers will root for the frazzled witch to work her way out of a hilarious pickle.” — Booklist (starred review) “After heating the cauldron and adding spices and veggies, [a witch] reaches for the pièce de resistance: a ‘spoonful of frogs.’ Unfortunately for her, but hilariously for readers, the would-be ingredients repeatedly, cleverly hop away, evading the stew, stirring up trouble, and ultimately providing inspiration for a brand-new recipe. Lyall’s spare, mostly restrained text uses ear-pleasing, catch-phrase-worthy repetition and variation (“Put. The FROGS. On. The SPOON”) while Brosgol’s retro-chic, increasingly frazzled digital illustrations are a chef’s-kiss of comic timing.” — Horn Book (starred review) “[A witch] demonstrates how to make frog soup in this humorous picture book tutorial. But after tossing in various veggies, the key ingredient—the titular froggy spoonful—refuses to cooperate. . . . The wily, hop-happy frogs escape from their tank, then p

A Spoonful Of Frogs A Halloween Book For Kids, is it available on Amazon?

Yes! But at Pricepulse we inform you when is the lowest price to buy the A Spoonful Of Frogs A Halloween Book For Kids

Should I buy the A Spoonful Of Frogs A Halloween Book For Kids now?

What is the current price of A Spoonful Of Frogs A Halloween Book For Kids?

What was the lowest price for the A Spoonful Of Frogs A Halloween Book For Kids?