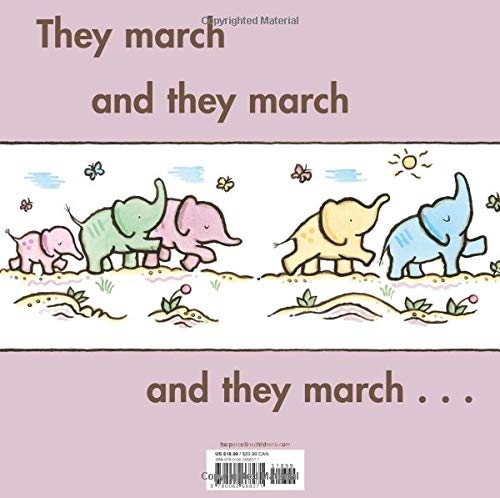 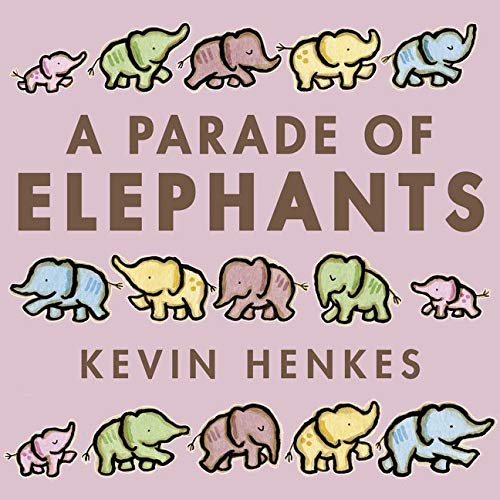 Product Description New York Times–bestselling and Caldecott Medalist Kevin Henkes follows five joyful elephants as they march from dawn to dusk. Where are they going? Read and find out! This engaging picture book is just right for the youngest reader and is a perfect choice for story time and bedtime sharing. Up and down, over and under, through and around . . . five big and brightly colored elephants are on a mission in this picture book for young children by Caldecott Medalist Kevin Henkes. Where are they going? What will they do when they get there? It’s a surprise! With a text shimmering with repetition and rhythm, bright pastel illustrations, large and readable type, and an adorable parade of elephants, Kevin Henkes introduces basic concepts such as numbers, shapes, adjectives, adverbs, and daytime and nighttime. A Parade of Elephants is an ALA Notable Book and an excellent choice for story time as well as bedtime sharing.  Review “Kevin Henkes has demonstrated a knack for getting it right...and he shows it again with “A Parade of Elephants,” a simple book done up in macaron shades of raspberry, blueberry, lemon, cassis and pistachio...It’s clear, clean and cheerful.” -- Wall Street Journal “Henkes’ latest tale for preschoolers focuses on five elephants whose daylong march provides opportunities for counting and exploring opposites. ...A muted palette and uncluttered yet nuanced compositions distinguish yet another winsome title from Henkes. Toddlers and grown-ups—snuggle up and enjoy.” -- Kirkus Reviews  (starred review) “Caldecott winner and fan favorite Henkes is back with a delightful new picture book. ...Henkes’s images are just as integral as the spare text. Done in a light, pastel palette, the five whimsical and expressive elephants speak for themselves. ...A must-purchase.” -- School Library Journal (starred review) “Henkes again displays his understanding of preschooolers: hungry for new information and experiences but also needing a framework of solidity and comfort. ... Simply perfect.” -- Horn Book (starred review) “With little more than well-placed dots and lines, Henkes conveys the elephants’ emotions and sense of accomplishment as the day turns to night. Well-executed and appealing, this book is a useful addition to preschool collections.” -- ALA Booklist “There’s a sense of energy on every page...With clear, bold type sized for puzzling out letters, this spare offering will appeal to preschoolers who, like the elephants, are settling down into starry sleep.” -- Publishers Weekly “A book that cries out to be picked up and petted and hugged…The softly musical flow of the text belies the delicate exactitude of the wordsmithing…the art turns the slightly individualized elephant poses into endearing choreography as the lines of elephants weave through the pages…high classic potential as a baby bedtime tale!” -- Bulletin of the Center for Children’s Books (starred review) “The versatile, ever-perceptive Henkes has created a beguiling book of pastel-colored pachyderms. . .The happy creatures demonstrate counting, a few apropos opposites like “over” and “under,” a dash of wonderous nighttime magic in the form of a shower of stars, and then—as always, parents will bless his name—the joy of settling down serenely to sleep after a full day.” -- New York Times Book Review From the Back Cover Hooray! The elephants are here. Get ready! They march      and they march              and they march . . . About the Author Kevin Henkes is an award-winning author and illustrator of many books for children of all ages. He received the Caldecott Medal for Kitten’s First Full Moon; Caldecott Honors for Waiting and Owen; two Newbery Honors—one for Olive’s Ocean and one for The Year of Billy Miller—and Geisel Honors for Waiting and Penny and Her Marble. His other books include Egg, Old Bear, A Good Day, Chrysanthemum, and the beloved Lilly’s Purple Plastic Purse. Kevin Henkes lives with his family in Madison,

A Parade Of Elephants, is it available on Amazon?

Yes! But at Pricepulse we inform you when is the lowest price to buy the A Parade Of Elephants

Should I buy the A Parade Of Elephants now?

What is the current price of A Parade Of Elephants?

What was the lowest price for the A Parade Of Elephants?