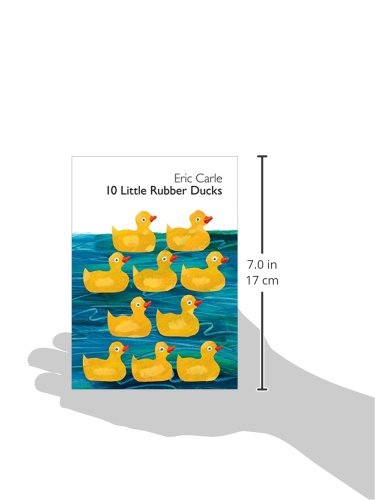 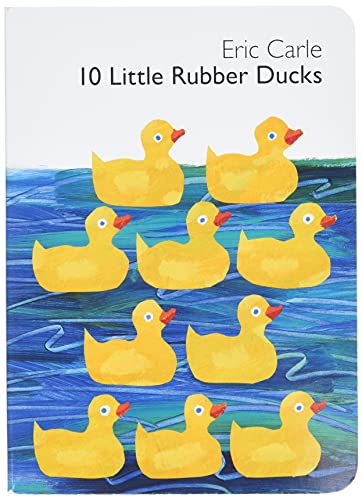 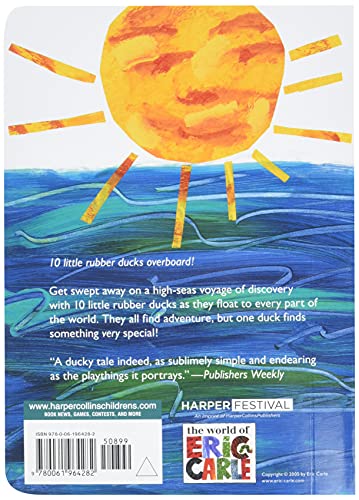 Product Description All aboard for a world of learning and fun! "Ducks overboard!" shouts the captain, as a giant wave washes a box of 10 little rubber ducks off his cargo ship and into the sea. The ducks are swept away in various directions. One drifts west, where a friendly dolphin jumps over it. A whale sings to another. But as the sun sets, the 10th little rubber duck is left all alone, bobbing helplessly on the big wide sea. Small readers and listeners will empathize with the little duck's plight—and will rejoice at the heartwarming surprise ending. In this poignant and funny story, illustrated with strikingly designed collages, Eric Carle takes readers on an exciting voyage of discovery. Following the little ducks as they float to all parts of the globe, young explorers can see for themselves the meanings of directional words and learn simple math concepts, such as counting and the use of cardinal and ordinal numbers. Each creature the ducks meet is seen in its own habitat and behaves in a true-to-life manner, offering a very simple first view of biology and geography. "A wonderful read-aloud for storytimes or one-on-one sharing. It's a definite 10," commented School Library Journal in a starred review. "Beautifully composed illustrations," said Booklist. "As sublimely simple and endearing as the playthings it portrays," agreed Publishers Weekly. This board book edition with sturdy pages is perfect to share with toddlers. Note that this edition does not include a squeaker at the end. Review “A marvelous counting/concept adventure. A wonderful read-aloud. It’s a definite 10.” -- School Library Journal (starred review) From the Back Cover 10 little rubber ducks overboard! Get swept away on a high-seas voyage of discovery with 10 little rubber ducks as they float to every part of the world. They all find adventure, but one duck finds something very special! About the Author Eric Carle was the creator of more than seventy picture books for young readers. Eric Carle was born in New York, USA. However, when he was just six, he moved with his parents to Germany. In 1952, after graduating from the prestigious Akademie der Bildenden Künste in Stuttgart, he fulfilled his dream of returning to New York. Eric Carle received many distinguished awards and honours for his work, including, in 2003, the Laura Ingalls Wilder Award for his lifetime contribution to children's literature and illustration. In 2002, fifty years after Carle's return to the United States, The Eric Carle Museum of Picture Book Art was opened in Amherst, Massachusetts. Here visitors of all ages can enjoy, in addition to Eric Carle's work, original artwork by other distinguished children's book illustrators from around the world.

The Very Lonely Firefly board book

The Very Lonely Firefly board book